The fourth mural tour of the 2020 BUMP Festival is a sensory loaded stroll down one of Calgary’s most exciting streets and business districts here in the Beltline. You’ll see 15 different murals, including 7 completed or in progress from this year. The tour begins with Calgary favourite Michelle Hoogveld and her ongoing play with colour theory plus the introduction of pointillism in her work. You’ll also see Montreal artist Doras’ Upstream mural underway – a tribute to the people who walk steady against the current of many social, political and economic challenges today. Not to be missed is BUMP headliner Ola Volo’s new signature mural emerging atop one of the busiest blocks on this iconic Calgary street.

Sidewalks can be busy so remember to keep safe physical distance from others and/or wear a mask! BUMP Safe! 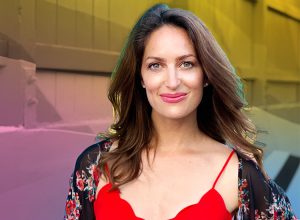 Michelle Hoogveld is a Canadian painter and mural artist, whose distinctive style is inspired by colour theory, connection, and matters of the heart. Michelle creates compositions of bold patterns and textile-like blockings of colour, with layers that weave and fold together as an intricate tapestry of who we are, celebratory of human identity and emotion.

Her colourful works are internationally recognized, beautifying and uplifting spaces in both the public and private realm. Creating around the world, Michelle has worked with a wide range of clients in Canada, the United States, Peru, Mexico, Germany, Portugal and England. Michelle holds a B.S. in Design from Lynn University as well as a BEd in Arts from University of British Columbia. 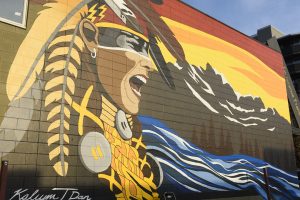 This piece, titled Sunset Songs, features a warrior singing healing songs for our earth – something as important today as it was when this was painted two years ago. 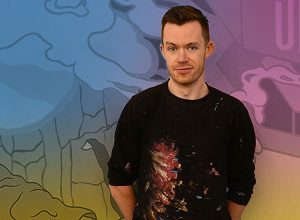 Doras is an Irish-Canadian artist, illustrator, muralist and director located in Montréal, QC. His style is colourful and dream-like, often combining historical ornament and iconography with the language of contemporary fantasy. His large-scale pieces draw from his background in illustration, featuring objects, scenes and characters that might easily have been ripped from the pages of a book.

This mural, Upstream, is a piece dedicated to all people who have walked steady against the current. It aims to illustrate the many social, emotional, political and economic forces a person faces when they decide to speak up for what’s right against the status quo. 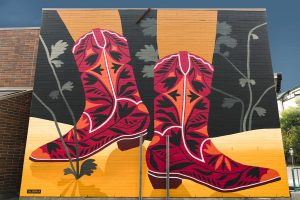 From Edmonton, AB, Jill has painted numerous murals Canada. Her portfolio shows her demonstrated ability for borrowing visual cues and inspiration from the history of the city, neighborhood, or topography of a location, then weaving them together with still life objects and natural forms. Her work aims to create open-ended narratives which allow people to create their own stories and find meaning within the work.

This mural is a playful twist on the traditional imagery of western cowboy boots and a nod to the building’s footwear-minded occupants, Gravity Pope. 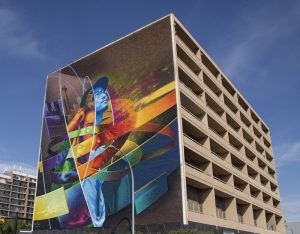 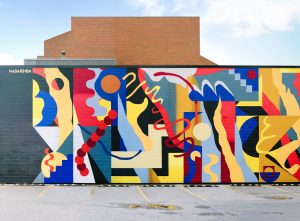 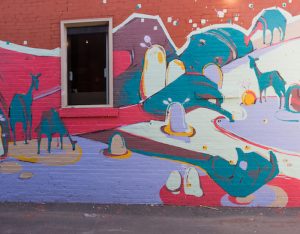 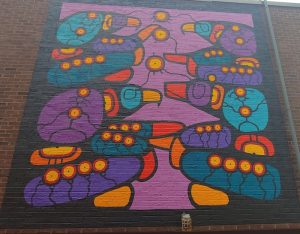 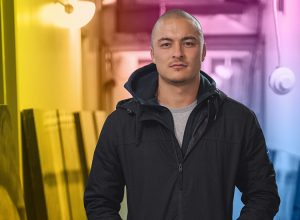 Alex Kwong is a Calgary-based artist focused on creating work that shares the stories of people and places. Kwong has been painting murals for half a decade, some of which you may have seen before in Calgary! He has also done collaborations with another Calgary-based artist, Toner all of which can be found around the city.

Simona Lisa features Calgary textile artist Simone Saunders and is a play off of Da Vinci’s famous painting that is the namesake of the long-running local art supply store this mural now adorns. 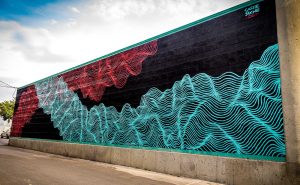 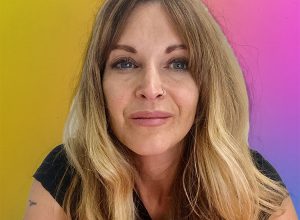 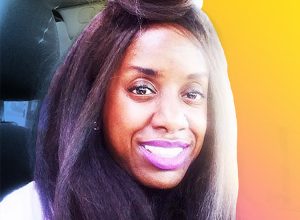 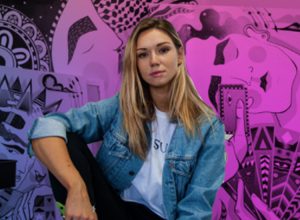 Ola Volo is a Canadian mural artist and illustrator from Kazakhstan with a distinctive style drawn from folklore, multiculturalism and identity. Her intricate works bring animals, people, architecture and nature together to articulate diverse stories rich with symbolism and elaborate forms. Ola creates complex narratives that acknowledge the subtleties of human nature while celebrating the little surprises of everyday life.

This new landmark mural by Ola will be somewhat of a departure from her usual colour palettes, opting for something bold and more cheerful at a time she feels it is important to create work that is especially uplifting. 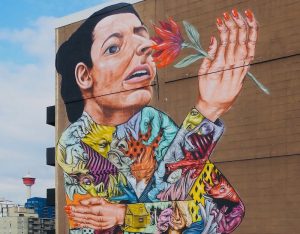 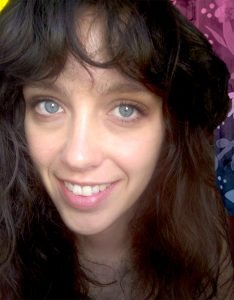 Kay Gallivan is a multidisciplinary artist from Lekwungen Territory and based out of Victoria, BC. Gallivan is well versed in creating original artwork, commissions, murals, set design, workshops, multimedia installations, and sign painting.