Danitdada (how are you doing or hello):
Nathan Patrick Meguinis is my name, but I am also known as Buffalo Boy, Traveling Rock, and Kind Hearted Man. Two of my names were earned, and one was given to me at birth by my Great-great-grandmother Bessie Inaa.
My artwork is a unique cultural visual expression of my Tsuut’ina (Dèné Nation) way of life which is a part of the International Peace Treaty #7. My art, murals, animations and illustrations are a unique contemporary stylization; a mix of abstraction, and realism that tells stories, historical events or philosophy.
I have worked for my language department for three years, in which I create artwork to help teach Tsuut’ina, and I’ve created language animations. Dèné Gunaha is My People’s Language.
Last year’s BUMP mural was my 1st major mural for the City of Calgary and I will always be thankful for the opportunity. The Mural I did was titled “Buffalo Nations Stand and Be Noticed.” This mural was something I worked towards so it was fun to finally spray and paint.
My most recent Mural was for The Children’s Advocacy Centre for their “sacred space project” which is used for Indigenous families as a smudging area, or to bridge the cultural gap. This was a challenge due to the amount of visual differences between my fellow Indigenous Nations but it was a good challenge. I also had to include the four directions, and the traditional teaching behind each direction. I also won the Tsuutina Gas Bar logo contest.
In my art I use traditional ceremonial colours which have a representation and what I use in all my artwork.

I am deeply grateful to family, parents, friends and other Nation Members for their support, education, and influence.

In this mural artwork I felt like I needed to make something that has an orange background as a reminder of the poor 215 babies who were found and how that number is in the thousands presently and the realities of the “generational impact” that the residential school had to this day. I am relearning my language because of that and I used my art to help save my language.

I also had a feeling to create something to honour my people, the great Dèné Nation, and we are the Beaver people of the Treaty 7 territory.

Tsuu T’ina are known to be the most warlike Nation in this area and we’re hard to find in our lands. We travelled from far, far south to up north and always called here home.”

“The man is dressed in his Sunday best with his hair braided in four braids, just like what I do when dancing at powwows or something very important. He is leading the way and his rifle is yellow to represent protection. The blue blanket with white dots is hanging over one shoulder to show he is a respectable warrior and the white paint is something the Dèné do when going into battle or dancing at a powwow.

The woman is holding a staff to represent peace and she also has their baby in a cradle board on her back.

A long time ago, when you traveled, you had to make sure your baby was well protected and didn’t cry while travelling near enemy camps or through enemy territories. So moss bags and cradle boards helped protect the baby from crying and also is very soothing and peaceful to the baby.

She has a beaded hat on that has the ceremonial colours on the rim of the hat, and also she has a purple shirt on showing she is important, and also purple represents thunderbird and is the women’s colour.

She is also leading the horse behind her.

The horse following is their pack horse and also has a travois to represent travelling great distance and a white teepee is on the travois wrapped up with blue string.

The white dots are a symbol for footprints and used for travelling in old pictograph hide drawings that I have been studying.”

Nathan also explained the significance behind each of the colors he used:
“⚪ White – something that is holy
? Yellow – is a protection colour and represent the sun
? Purple – thunder bird and women colour
? Blue – the sky and an all the water we need to survive
? Green – represents all plant life
? Red – Mother Earth
? Orange – the realities of residential schools and in my culture it represents the rainbow 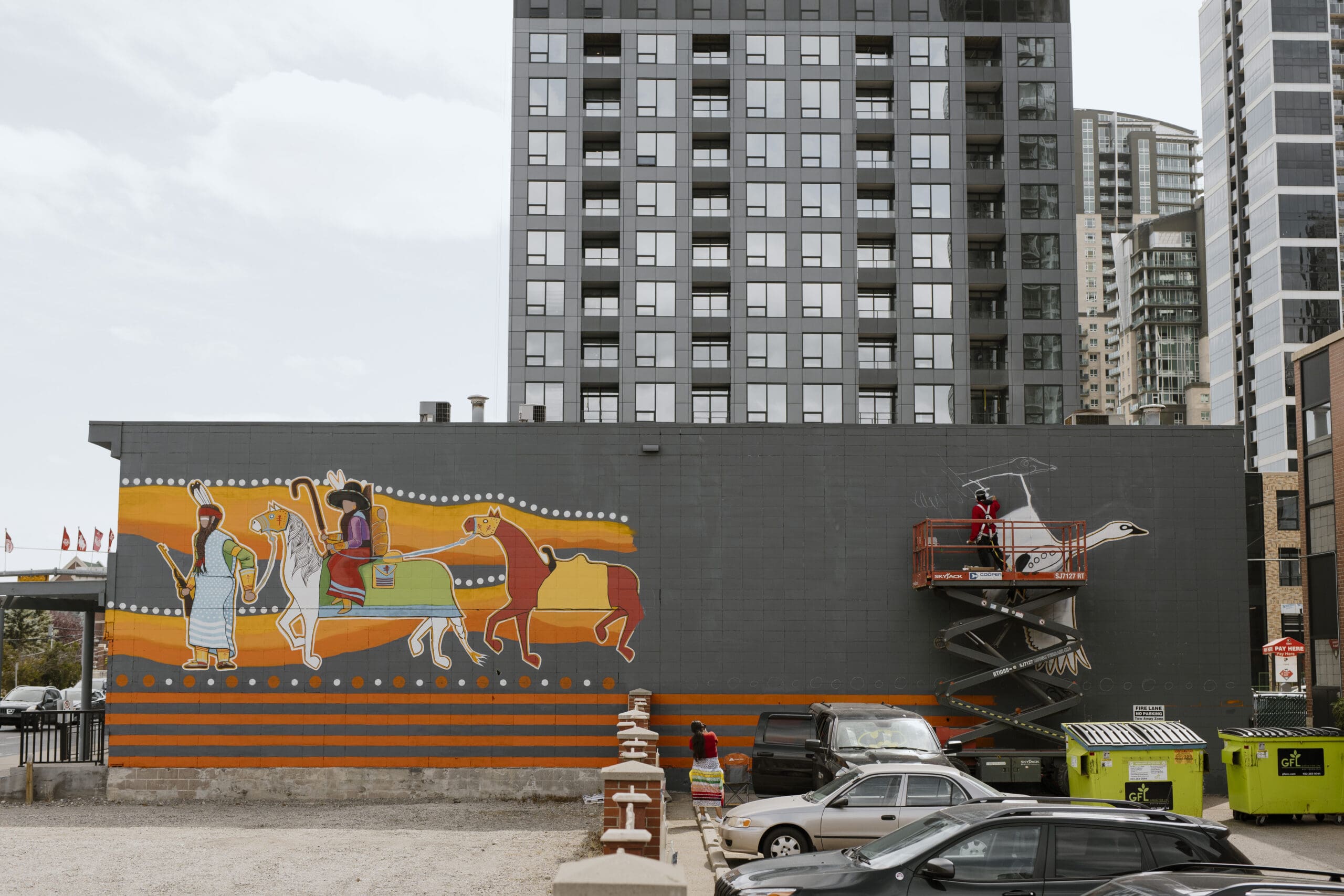 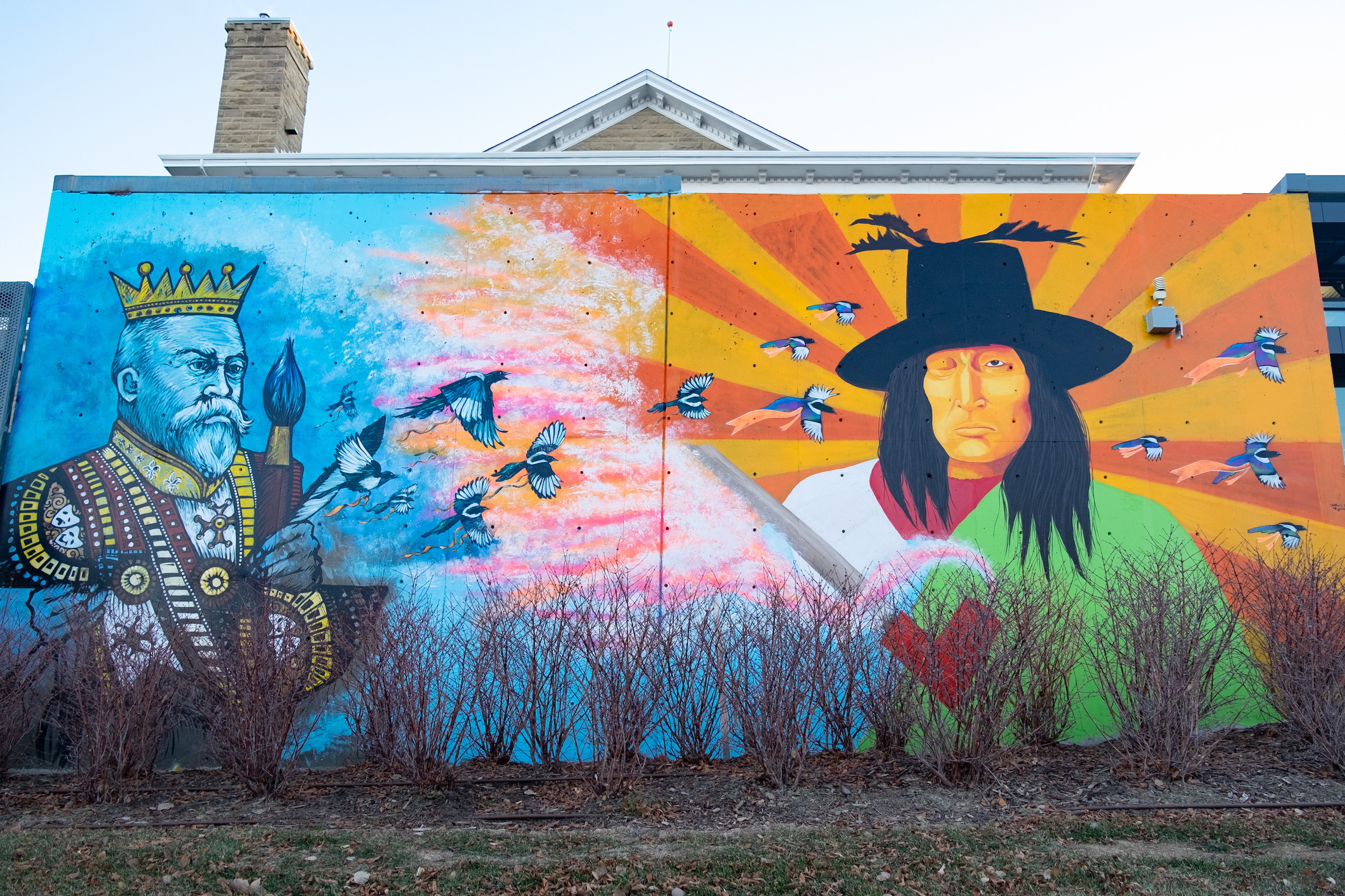 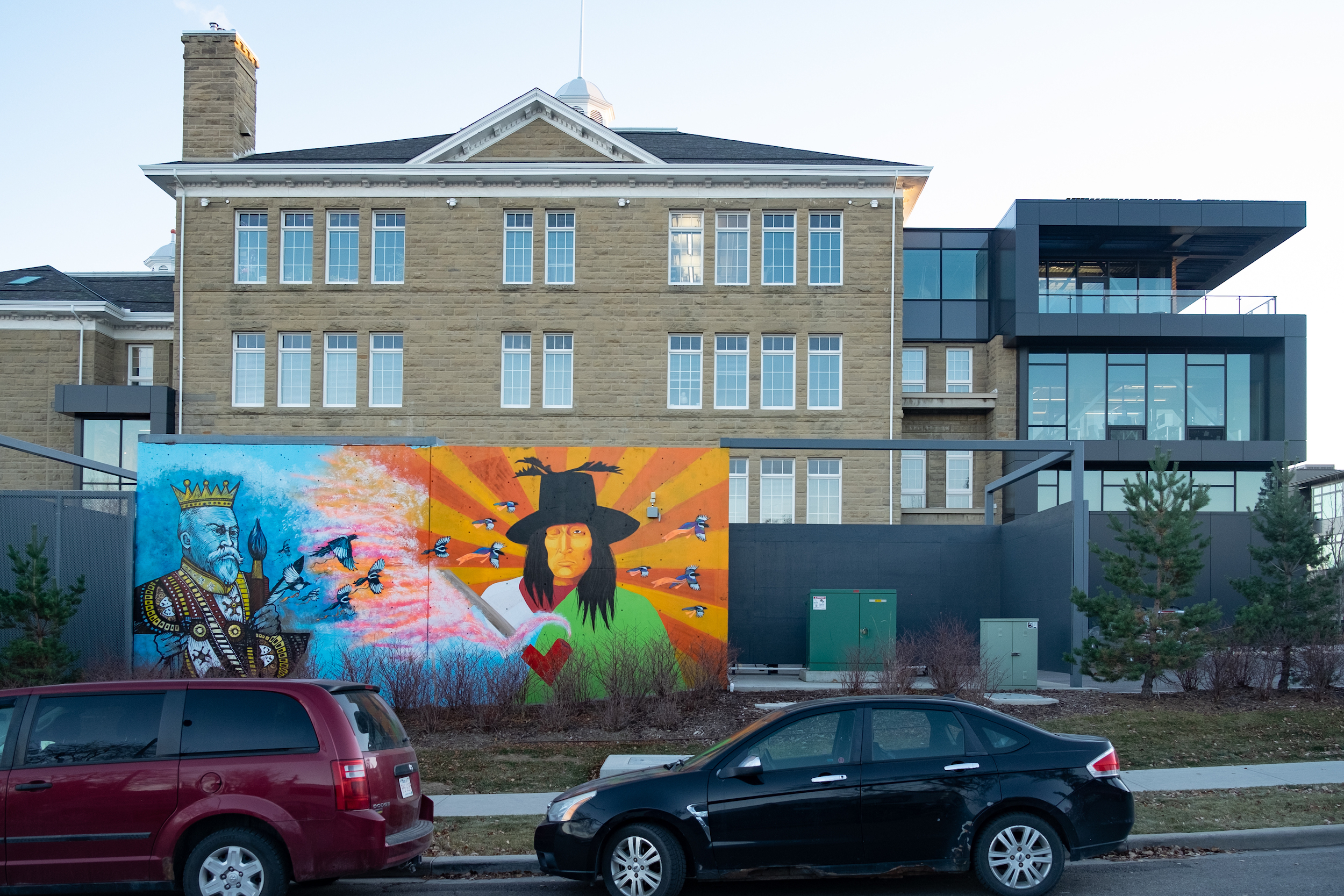