CONZ began his graffiti career in 1993 after spending most of his childhood immersed around art. Having grown up in a family with many forms of artists, it was only natural for his own creative ingenuity to shine through at a young age.

While on vacation in Europe in 1992 he was introduced to graffiti for the first time and felt instantly compelled to start down his own creative avenue. Art takes many forms and beauty has always been in the eye of the beholder, but growing up deaf has truly made CONZ appreciative of the world around us.

Growing up in Calgary and being very visually enriched due to his auditory limitations has forced him to truly see what was missing in the city. His passion for creating beauty has led him down many roads and he has become well known in his community for his work. His contributions to the vitality and vibrancy of this city have not gone unnoticed.

His work has taken him to many places around the world and you can find his paintings in São Paulo, Japan, Mexico, Philippines and many more. Although his favourite medium is graffiti, he has been known to dabble and experiment with water colours, acrylics and sculptures.

“Nature in all of its glory can be either a destructive force or an accumulation of creative beauty. Should the world as we know it crumble around us, I believe nature will hence show her true power. This piece will be my version of what the world would look like if indeed nature was allowed to run its course, without human interference.

Starting with the backdrop, the eye will be instantly drawn to the lush and massive Rocky Mountains. Upon closer inspection the viewer will see Calgary’s very own C-train cars as they are a visual reminder of what once was. Since old technology will no longer work and people will need to protect themselves from the elements we may someday be forced to live in abandoned C-train cars in the mountains, perchance even building homes with other materials that will still keep the human spirit of ingenuity alive.

Calgary is known for its true Canadian spirit and its kindness therefore it’s only natural that people will come together to form communities. These communities will speak to the creative flow of its people as they come together to not only to survive but to enhance their human experience as one. The old and the new will collide in a world that will truly showcase what Calgarians can achieve when working together in unity. This conceptual design will spark conversation about what is most important to Calgarians. I believe that this is the strong desire to be a part of a community that benefits the whole.“

Created in partnership with the Greenview Industrial BIA. 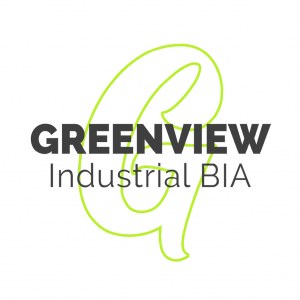